Orange Shirt Day (September 30th) is a day when we honour the Indigenous children who were sent away to residential schools in Canada and learn more about the history of those schools.

Today during our grade 8 Social Studies class, we reunited both classes to discuss the significance of Orange Shirt Day. Our conversation led us to a series of key words, which were then written on a small orange t-shirt, to remind each and every one of us of the impact of the residential school system on our First Nations. 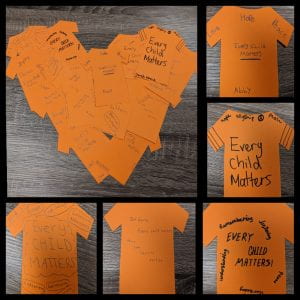 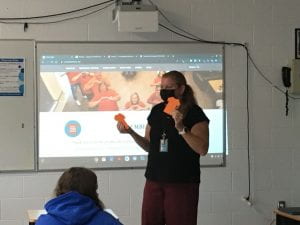 Orange shirt day is a movement that officially began in 2013 but in reality it began in 1973 when six year old Phyllis Webstad entered the St. Joseph Mission Residential School, outside of Williams Lake, BC. Young Phyllis was wearing a brand new orange shirt for her first day of school – new clothes being a rare and wonderful thing for a First Nation girl growing up in her grandmother’s care – but the Mission Oblates quickly stripped her of her new shirt and replaced it with the school’s institutional uniform.

While she only attended for one year the impact affected Ms. Webstad’s life for many years. “I finally get it, that feeling of worthlessness and insignificance, ingrained in me from my first day at the mission, affected the way I lived my life for many years. Even now, when I know nothing could be further than the truth, I still sometimes feel that I don’t matter.” [1]

Ms. Webstad’s story is the nucleus for what has become a national movement to recognize the experience of survivors of Indian residential schools, honour them, and show a collective commitment to ensure that every child matters. The initiative calls for every Canadian to wear an orange shirt on September 30 in the spirit of healing and reconciliation.

The date, September 30, was chosen because that was the time of the year the trucks and buses would enter the communities to “collect” the children and deliver them to their harsh new reality of cultural assimilation, mental, sexual and physical abuse, shame and deprivation.

Welcome to our 2020-2021 school year! Tonight is our ‘Virtual Back to School’ evening where you are invited to join each of your child’s teachers virtually (see Dr. Mitzmacher’s email with the schedule for the evening) and learn about the different programs. There will also be time for you to ask questions.

Below you will find the video presentation about each grade for Social Studies if you ever need to refer back to it or if you’re not able to join us this evening. Please reach out if you have any questions!

I am really looking forward to our continuing our learning and great conversations together online! We did begin our history unit focusing on Canadian Confederation and we will resume it next week.

For the next week, I would like us to turn back to our geography unit where we learned all about megacities and population settlement patterns. You each researched a different megacity around the world and created an excellent photo collage showing the factors that led to the city’s growth, the challenges the city faces with having such a large population, and then solutions (current or aspirational) that address each challenge.

For today’s independent work period, I would like you to research your megacity again, but through a different lens. With COVID-19, megacities are the areas in particular that will face the largest challenges with having such a high population (megacity=over 10 million). Your lens today is to learn about how COVID-19 is currently affecting the megacity you researched and how the city is mitigating the effects.

New vocab word of the day is ‘mitigating’- this means lessening the impact. A great Canadian example of this is our fun snowstorms. The snow storms are still going to happen (we can’t control this), but we can mitigate the impact by ensuring we have snow tires on vehicles to reduce car accidents, having equipment to shovel snow around the house, etc.

I am available during this time and will check in on how you’re doing. I will also help each of you find reliable sources, which is so important given the issue you’ll be looking into. Here is a breakdown of how to spend your time:

“See” you soon and email/Google Hangout chat with me if you have questions this morning!

Grade 8 has been learning all about sustainable development. We have learned about what population density is and how to calculate it. We have also been looking at different distribution patterns for communities such as linear, scattered, clustered, and peripheral.

Linear: The population lines up along a natural of man-made feature.

Scattered: The population is spread out over a large area.

Clustered: The population is tightly packed in a small area.

Peripheral: The population surrounds a feature, like a mountain or stadium, and circles the edge of a territory.

What distribution pattern(s) do we have in Ottawa? Comment below!

We are currently learning about megacities- what is a megacity, the factors that allow for these areas to grow to a population exceeding 10 million, the challenges that they face, as well as creative solutions for sustainable development. We watched The Daily Conversation series which introduces us to different megacities around the globe.

A reminder that on Wednesday we have our Term 1 quiz for Social Studies. Below is the document that we discussed and reviewed last week. Please let me know if you have any questions! You’re going to do great! Remember to be proactive and study a little bit each evening, rather than leaving it all to last minute.

Just a reminder that on Monday your roundtable reflections are due for both Mr.C and Mrs.B 🙂

We are so proud of your meaningful participation in the federal election roundtables. Many of the participants said that hearing your question and seeing your involvement was the highlight of the roundtable for them. The Jewish Bulletin article has been published about the roundtables and all of your quotes about the political party platforms. Check out the article below:

We are looking forward to the election roundtables with you this week and next! A reminder to be at school by 7:40am (meeting and leaving in the foyer by 7:45am) this Wednesday and Thursday morning. There will be a light breakfast provided BEFORE the roundtable.

Tonight for homework, pleaase finish looking at the Conservative Party platform. The last one we looked at in class was ‘Climate Change & Environment’. Try your best to understand each platform point. For tomorrow’s class, come prepared to discuss the 1 issue that is most important to you and 1 potential question to ask the candidate.

Here is the link to the Maclean article: https://www.macleans.ca/politics/2019-federal-election-platform-guide-where-the-parties-stand-on-everything/

Welcome back! It was wonderful to see each of you today and to hear all about your fun-filled summer! A really big welcome to our new students who have joined the OJCS Middle School family!

Over the first week of school, please familiarize yourself with our Social Studies blog page. On the page you will find how to subscribe to your homework and events Google calendar, our school and classroom behaviour expectations, the new homework policy, as well as important posts and updates from our class. Please come as questions you have about the blog or any questions as you get set up with your schedule and new routine over the first week of school.

Thank you for your participation today in our activity and discussion about what we want our classroom to look and feel like, what tools you need this year to be successful, and what you hope to learn about this upcoming year together.

Have a wonderful evening!

Stay up-to-date on all the latest posts